Restor(y)ing Indigenous Ways of Being on Screen: Fourth Cinema Documentary.

Presenter: April Lindala
Registration Number: 053
Institution: Northern Michigan University, Marquette, USA
Abstract: Documentary filmmakers and Indigenous communities have a stormy historical relationship with some early films posing as authentic representations, where non-Native filmmakers often set a cinematic stage of how they thought an Indigenous community should look on screen. Fourth Cinema films, specifically documentaries, have the opportunity to represent tribal nations and Indigenous communities in cinematically sovereign ways and in doing so, such films may operate as both expressions of "survivance" (as explained by Vizenor) and critiques of "cognitive imperialism" (Battiste). Films examined in this study will range in representation of tribal nation / Indigenous community, subject matter, production date, filmmaker, and mode (the specific style of documentary). Frameworks employed to articulate the representation of cinematic sovereignty (a blending of cultural sovereignty from Singer and visual sovereignty from Raheja) will include contributions from multiple Native scholars' voices: Native/Indigenous feminist theory (Tuck, et al), relational accountability and relationality (Wilson), and tribal critical race theory (Brayboy). 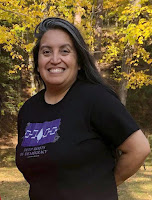 Bio: April Lindala has been a full-time employee at Northern Michigan University located on Anishinaabe territory since February 1993. She has worked at WNMU-TV13, the Center for Native American Studies, and Diversity Student Services. She obtained a MFA from NMU in 2006. From January 2005-June 2019, she served as the Director of the Center for Native American Studies. In Fall of 2019, she earned rank of Full Professor in Native American Studies. Professor Lindala has had several poems published in various anthologies and publications. She was the project director for the anthology, Voice on the Water: Great Lakes Native America Now published by NMU Press. She was a top-five nominee for 2021 UP Poet Laureate. She is completing a PhD in Rhetoric, Theory and Culture from Michigan Technological University in Houghton, Michigan.
Email ThisBlogThis!Share to TwitterShare to FacebookShare to Pinterest
Labels: #IFM2021, Abstracts IFM2021, Cinematic Sovereignty, Final List Presenters IFM2021, Fourth Cinema, Indigenous documentary, Panel 2, Presenters IFM2021, Survivance
Newer Post Older Post Home