Presenter: Hudson Moura
Registration Number: 077
Institution: Ryerson University, Toronto, Canada
Abstract: Carne y Arena by Mexican director Alejandro González Iñárritu is an immersive mixed reality installation that allows visitors to walk barefoot across a beautiful sand desert while experiencing violent incidents by crossing the Mexican–U.S. border with illegal immigrants. Later, the visitors realize that they witnessed real-life accounts, which they can hear displayed in videos at the exhibit’s end. Thus, the visitors can get a better sense and understanding of refugees’ traumatic and powerless experiences.

The installation comprises three different rooms, a waiting (cold) room filled with authentic immigrant shoes, the actual six-minute VR experience, and a wall displaying the refugees’ video portrays. The waiting room is freezing like the rooms migrants stay in if the border patrol captures them. To feel the refugees’ vulnerability, the visitor needs to leave behind all their possessions, including their shoes and socks, before entering the VR area.

According to Iñárritu, he intended to subordinate technology to the human condition. “I despise technology,” says the filmmaker. According to him, technology does mean nothing unless it can reveal or denounce a human’s situation. Therefore, technology must be subordinated to humans, to humanity, and to the arts. However, has the film lost the power to engage the viewers emotionally? Can virtual reality simulate refugee’s dispossession (the sense of the self) while alleviating society’s consciousness? 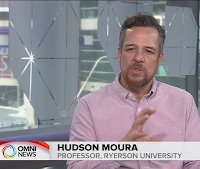 Bio: Hudson Moura is a lecturer on film, new media, and global justice at the Department of Politics and Public Administration and an associate faculty at the Immigration and Settlement Studies Program at Yeates School of Graduate Studies at Ryerson University. His scholarly work has been presented at numerous international conferences and published in English, French, Spanish, and Portuguese. Currently, he is writing a book on refugees in films. As a documentarian, his films portray artists, writers, and culture. He served as a film programmer for several film festivals in Toronto. He has also facilitated numerous hands-on workshops on documentary, mobile filming, and video editing in universities and film festivals. He is a member of the Betinho Project Group, which aims to promote human rights, food security, and participatory democratic processes. He chairs the Interactive Narratives and Interculturality on Film and Media Research Group, focusing on the politics of race, migration, gender, and minorities (Indigenous, Black, anti-racist trans- feminist and queer) related to technology, media, and digital practices. (http://www.hudsonmoura.net)
Email ThisBlogThis!Share to TwitterShare to FacebookShare to Pinterest
Labels: #IFM2021, #Intermediality, Abstracts IFM2021, contemporary cinema, Documentary, Film Theory, Final List Presenters IFM2021, Interactive Art Installation, Panel 9, Refugees, VR
Newer Post Older Post Home

Submit your paper or research-creation presentation proposal by January 9th, 2023