"If you think writing for children is just practice for writing for grown-ups, think again. [Children] can spot a fraud a mile away." Andrew Melrose
Presenter: Pavlina Ferfeli
Registration Number: 016
Institution: University of Athens, Greece
Abstract: This paper examines the staggering rejuvenation of children’s picture books in the last decade, as a direct result of emerging narratives that celebrate racial identity, underrepresented culture, and heritage at the point of extinction. Awarded works such as Kwame Alexander’s The Undefeated, Carole Lindstrom’s We are Water Protectors, and Tami Charles’ All Because You Matter, push the boundaries of children’s literature to its limit, by challenging concepts related to appropriacy, narrative structure, subject matter, iconicity, and reception. Simultaneously, the Covid pandemic influenced the children’s publishing world no less than the “Own Voices” picture book, contributing to an entirely new landscape in the domain of digital storytelling. In a post-pandemic world, we witness a dramatic change in the practices of most publishing houses, which dare to explore uncharted copyright territory, and graciously grant more permissions to writers, teachers, and librarians to share picture book content through various media platforms. The combination of the momentum of the “Own Voices” picture book and the newly emerging licensing landscape had amazing repercussions in both storytime reception and children’s publishing dynamics.  Apart from an unprecedented boost of sales, rise in readership, and the founding of new imprints, the very fact that in digital read-aloud storytime a staggering amount of artistic media intersect, leads to the birth of a hybrid new genre – that of the picture book video. However, although this uncharted intermedial territory of “Own Voices” picture book video is one to follow, there are additional voices raised that speak of cacophony. In March 2021, BIPOC young adult author Rin Chupeco made an unusually poignant remark. Unhesitatingly sincere, Chupeco tweeted that the #ownvoices picture book has been metamorphosed into a punitive “cudgel” used on the part of publishers. The tweet soon gathered thousands of likes, raising a fiery and challenging question: Has the “Own Voices” literary edifice painstakingly erected itself into a prison cell with bars of freedom? 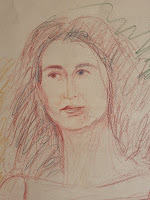 Pavlina Ferfeli portrait
by Lily Kapetanaki
Pavlina Ferfeli is an independent scholar from Greece who was awarded a Ph.D. with distinction from the University of Athens for her work on the American poet Mina Loy. Her academic work has been presented, published, and reviewed internationally. Her monograph Poetics of Identity: Mina Loy Voicing the Fluid Female Body, is available from Peter Lang. She has been awarded various poetry prizes, notably from the British Council, and forms an active member of SCBWI (Society of Children’s Book Writers and illustrators). Her research interests include postcolonial theory, corporeality, representation, and the semiotic intersections between poetry and the fine arts, with a special focus on media and media art.

Toronto is in the 'Dish With One Spoon Territory’. The Dish With One Spoon is a treaty between the Anishinaabe, Mississaugas and Haudenosaunee that bound them to share the territory and protect the land. Subsequent Indigenous Nations and Peoples, Europeans and all newcomers have been invited into this treaty in the spirit of peace, friendship and respect. One Dish wampum Belt reproduction by Richard D. Hamell 2010.